richard_riehl
After 35 years in public education as a university administrator and a high school English teacher, I began my second life as a freelance writer, winning San Diego Society of Professional Journalists awards for my opinion columns in the former San Diego daily North County Times and the San Diego Free Press.

Have You No Shame , Mr. Caruso?


When my wife and I arrived at Alga Norte Park last week to be among the first to sign the referendum to let us vote on the city Council's decision to allow a developer to build a shopping center on the Hedionda Lagoon, we found two tables there, the first set up to dissuade those of us headed for the referendum table nearby. The folks supporting the Caruso development were pleasant enough, inviting us to hear their side of the story. But having already been duped into signing a petition to "save the Strawberry Fields," only to learn we'd been misled, we headed straight for the referendum table a few yards away.

While we were a little disappointed to see the opposition nearby, we concluded it was just an example of a healthy democracy at work. But when the relentlessly dishonest television ads began to flood the local channels it became clear Rick Caruso's multi-million dollar marketing campaign remained in full swing. Then a glossy mailer arrived, paid for by Preserving Carlsbad Open Space the Right Way, Inc. (2350 Kerner Blvd., Suite 250, San Rafael, CA), "with major funding by Caruso Affiliated." It featured a quote from the Carlsbad Strawberry Company owner, Jimmy Ukegawa, the person most likely to benefit from having a shopping center next door to his business. He claims, "The efforts of corporate interests from outside of California and others to overturn our city Council's approval of the 85/15 Plan is an attempt to kill off my family strawberry farm and end coastal agriculture in Carlsbad." 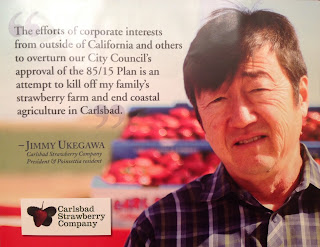 Ukegawa is apparently unaware of the provisions of proposition D, passed by the voters in 2006. It specifically promotes farming in the area in question, for as long as it is economically feasible. It also provides for a comprehensive planning process, with significant citizen input, to determine appropriate open space uses. In fact, it raises agricultural uses of the property from priority 5 to priority 1. The owner of the Strawberry Fields has no more to fear from a public vote on the Council's decision than any other business owner in Carlsbad.

But the most troubling spin of these ads is linking the call for a vote of the people to, "corporate interests from outside of California" and "others." Rick Caruso must be having nightmares about his failed project in Arcadia eight years ago, where the city Council unanimously approved his plan for The Shops at Santa Anita mall next to the race track before a Los Angeles County Superior Court judge ruled the project's environmental impact report had to be revised before the plan could move forward. Judge James C. Chalfant found 11 points of contention in the original environmental impact report, ranging from air quality to solid waste to traffic mitigation (L.A. Times, July 25, 2008). After the Arcadia City Council approved his plan it was challenged in lawsuits by neighbor Westfield Santa Anita and its community advocacy group Arcadia First!

Sound familiar? It must have been a déjà vu moment for the developer when he learned of the citizens for North County referendum campaign. But this time, after publicly blaming Carlsbad's Westfield mall for launching the same attack he faced in Arcadia, Westfield's vice president for corporate relations shot back, "Despite the use of the Westfield name in false statements by Caruso and others, Westfield is not providing any support, financial or otherwise, to the referendum drive." He promptly retreated to blaming "outside of California corporate interests," turning to the old Nixonian explanation for civil unrest.

When Caruso refers to "others," he's talking about you and me. Sign the referendum before September 24 and get the right to vote on the future of Carlsbad's open space by the beach.
Posted by richard_riehl at 9:56 AM